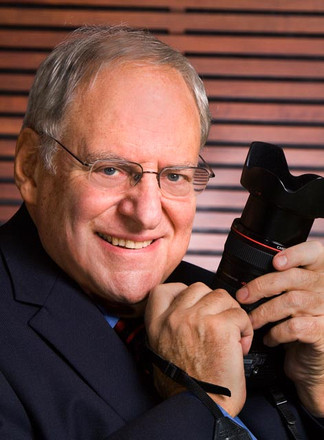 Henry Grossman was born in New York City to renowned etcher Elias Grossman who had been commissioned to do portraits of Gandhi, Einstein, Mussolini, Paul Robeson and others. By helping his father, Henry learned, perhaps unconsciously, the key elements of classical portraiture -- especially the interplay of shadow and light.

Upon graduation, Henry was armed with a portfolio that would have been the envy of a photographer twice his age. While still in his twenties, he went on to shoot numerous assignments and covers for Life Magazine, The New York Times, Time Magazine, Newsweek, Paris-Match and others. His subjects ran the gamut from prominent political figures (the three Kennedy brothers, Lyndon Johnson, Richard Nixon) to painters, sculptors and writers (Alexander Calder, Kurt Vonnegut, Vladimir Nabokov) and, especially performing artists (Elizabeth Taylor, Richard Burton, Martha Graham, Rudolph Nureyev, Leonard Bernstein, Luciano Pavarotti, Placido Domingo, Leontyne Price, Barbra Streisand, Thelonious Monk). Frequently he worked as the official photographer for a Broadway show and would then follow-up with a photo-essay for Life Magazine on the same show.

Henry Grossman shot the Beatles extensively between 1964 and 1968. Despite a background in classical music and portraiture, Henry, only a few years older than the Beatles themselves, developed an immediate rapport with the group. In addition to covering their initial appearance on the Ed Sullivan Show and the movie locations of "Help!", Henry enjoyed unprecedented access and was invited into the Beatles' homes to photograph them informally with their friends and families.

In 2008, Curvebender Publishing released a limited edition of Kaleidoscope Eyes, documenting one evening of recording the Sergeant Pepper album at the Abbey Road studios. In December 2012 Curvebender released Mr. Grossman's highly anticipated Places I Remember, a limited edition book consisting of more than 1,000 mostly unpublished Beatles pictures. While Kaleidoscope Eyes still has some copies available from http://www.curvebender.com, the mega-volume Places I Remember has been completely sold out within a few months of its release date.

Unknown to many of Henry's subjects and colleagues was the fact he was an actor and Wagnerian tenor. After attending Brandeis he later studied with Lee Strasberg where his classmates included Dustin Hoffman and Elliot Gould. Henry went on to perform at the Metropolitan Opera as a principal tenor and on Broadway for a run of more than 1,000 performances in Grand Hotel.
photos by Henry Grossman / © Grossman Enterprises LLC. All Rights Reserved.
Powered by ZENFOLIO User Agreement
Cancel
Continue